Law of the Letter

My Wife Falls Asleep to Friends and It Streams All Night

And I’m left awake
to decide when to mute the timeline:
maybe, the one
where they swap apartments
of radically different shape and quality
in the same building,
or the one
where everyone has a good laugh
about how silly Phoebe is
to follow her mother’s advice
when the woman killed herself, lol.

The next morning,
Monica and Chandler may be married
but that night
they will still be arguing
about the wedding.
The next morning,
Rachel’s teeth
are blinding in their fabricated uniformity
but that night
they soften
into the mouth of a common person.
All the jokes
that unwound silently over us
as we slept
recursively find their sound
the next evening:
Joey tries wearing women’s underwear
but stops because it makes him seem gay.
Chandler enjoys watching red carpets
but hides it
because it makes him seem gay.
Ross curls himself around Joey in a nap
and everyone runs to see for themselves
because it makes them seem gay.
Kathleen Turner shows up as Chandler’s drag queen dad
and everyone loses their minds.

Every twenty-five minutes
they are twenty-five again,
splashing around in a fountain
on the Warner Brothers lot,
dancing according to their archetypes
twenty times a night
and forever.

The perimeter is paved
for people like us
to drive through
and take pictures.
Wide, deep water
submerging four dissolved towns:
dismantled libraries,
vacated graves,
rooms where couples slept together.

You pull over, suddenly
recognizing your own unmarked attraction.
Lead me into the woods
to show me what was once a house.
Boggy steps slump
to the sunken leaf-layered hollow
that was the cellar.
I won’t go so far
as to descend them.

Around the next bend,
the observation tower.
At the top,
we press our faces to the glass.
Our arms touching from shoulder to wrist,
we lean on years of carved names.
Islands that were hills
rise below us.
We stay, close, a long time.

It’s dark as I drive, alone,
back to my city: pragmatic, alive,
beside a breathing ocean,
its monuments preserved.
The moon is half-visible
and half-obscured.
At home,
high above the street,
I turn the tap.
Water has also traveled
from there to here,
from the watershed we observed
to my outstretched hands.

Elizabeth Galoozis has published poetry in "RHINO Poetry," "Sinister Wisdom," "Call Me [Brackets]," and "Sundog Lit," among others. Her poem "The Grove" was a finalist for the Inverted Syntax Sublingua Prize for Poetry. Elizabeth's scholarly work has been published in "The Library Quarterly" and "College & Research Libraries;" she co-edited two books for the Association of College and Research Libraries (one forthcoming this year). She works as a librarian and lives on Tongva/Kizh land in southern California. 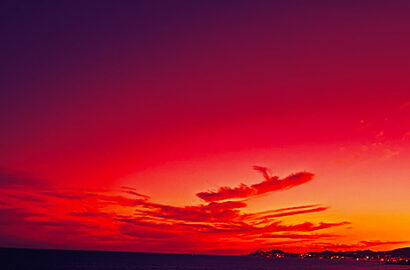 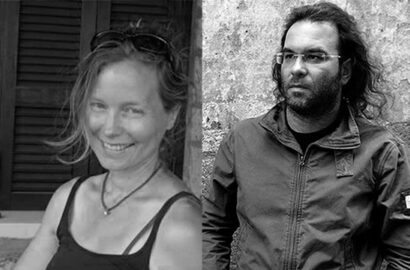