From 19 to 28, there was a lot of turmoil in my life, but in a stuck way. Then, around 28, my life started to get shaken up. I realized I wanted to grow more and that anything that wasn’t working in my life, I could fix it. I feel like I came into my womanhood. And that was when I got married.

Open on. Normalization of love and battle. Mother’s dogmatic sobriety. The well-worn preface of a girl’s drunkenness and sex and abuse. The Wife writes. Excess, but of a different kind. The kind she learned about as a girl. She will have a pregnant body, but it’s not yet stated in the narrative. It’s understood, or assumed, what difference does it make since it just is?

Youth. The women she loved as a girl unconcerned with death. The obvious necessity of sweaters over gowns on a desert winter night, ignored for the sake of shoulders. Spaghetti straps. Broken dress codes. Santa Anas surprising. Hidden suffering. Dreams of little children, as a child. Time passing. Cut to. Reliance on others for emotional certainty.

Cut to. Narrative uncertainty. It arrives as memories do. This story. Somewhere in there, she married. What choice did she have? A woman standing alone in the snow, frozen. Long plaits. Ambiguous lesbianism. Its promise skirted. A prince disrupting possibility. Winter came, as it does for each girl. An extended metaphor that never quite flatters. Quick, deep cuts.

The little boy, long before, staring up at his mother. Beside her, the man who coked her up. She might have been a girl in a village, though she was a woman in Hollywood. Details on the cutting room floor picked up, re-felt. Her childhood has a mythic quality, perhaps because she grew up in Los Angeles, when it was still a town. Mothers appearing on the hillside as their own origin stories, disappearing, reappearing.

The cook’s fat husband asking her mother and her twin sister to jump on his belly without their undies. Again! Again! he’d say. The girls giggling unknowingly. A sexual exploitation that covered over other forms.

Later, the dumbness that comes with place. Heteronormative romantic love dominating sexual development. Womanhood as bad fashion after aging and plucking chin hairs, marrying and leaving the city to be run into the ground by domestic labor. The war, on and on.

We never quite fit the narrative, but it’s all we have.

This is a story about loving elsewhere, meaning dying. When you are a man, I am The Wife in a domestic thriller, little girl covering her mouth. Disbelief at what she has seen and said. Or perhaps done. What she is really thinking about, it is clear by her expression, is her mother.

She thinks, Should I just sing doo wah diddy instead, like the sad woman in the rain in the LA story? Flashes of billboards that talk. Her own emotional responses always estimating some film.

I’m sorry. I cannot not. I cannot love you that way.

A maternity ward. Rain, a symbol for snow in the West. Girls and mothers and winter are still an everlasting love triangle. As in a sitcom, The Wife finds herself repeating to the husband, please, just listen for once. The genre, the medium, slipping. She hears the voices of other women, but that’s too crazy. The narcissism of plot and form.

She, babe in arms now, gazing out a large window. The way he looks at her. The way they all look at her. Coming and going. Bringing flowers and cards and things for the baby. Why won’t anyone bring her more food? Why won’t anyone let her rest? She was slow and full, and now what? It’s much more than the male gaze. It’s the way he asks about the general state of things each day, like the answer is not always the same. It’s not the cruelty of the baby, how could it be, she’s so kind. Her cry outlandish, but she’s trying. More than can be said for anyone else.

The men that abused her mother. The saga of him tying her up. Her story as duration. Time as fairy tale. Sexual difference as itself part of the epic tradition. Womanhood as conditional clause. Narratives like second bodies. She sees it all, imagines herself somewhere in the other room, with the nanny. Does her mother play along or call for help, and did it make a difference? Two hot bodies just trying to hold it together.

This is not an allegory. Or fantasy. Oh God. I wouldn’t dare. We will make our own way. It is post-fact, by which I mean post-myth. By which I mean the end is near. She will in time become the mother. By which what is meant again.

The Wife, now technically a mother, is speaking to the child who is not yet. The ocean is far away, but no one swims in it. When The Wife was a girl, she lived in a village in a tattered corset dress. It’s represented or implied. Her father a fisherman, watching her bathe, do laundry, do domestic labor, creepily. You’re looking so good these days. In the memory, over and over, at a very public dinner table. Salt. Wind. Each time he speaks, this way. Is that when she realizes? In that familiar line of dialogue that structured how she came to know her own flesh? Repetition of a narrative line defining childhood? She was barefooted but not yet pregnant. Hot LA sun beating down.

The wars are far away and the kids in the village don’t know any better. Historical temporal cultural specificity locating narrative in time. In a post-apocalyptic world that looks just like history. Of course it was destroyed. Are they the only ones left in this world? Love likes to think so, which is why she finds it hard to participate.

Before the baby, The Wife and the husband drove for nine days across the ravaged countryside trying to get away. From? Everything? Looking for sun. In doing so, only reenacting. He, like a spoiled child, starved for her body like marriage gave it to him. As they drove, men fought on old television sets in store windows. Routine violence. A radio host called for all female politicians to be shot in the vagina. Life went on, as it does. They came upon a new location.

Exterior village. Timeless setting through which we might understand where we are in history. Night. I do not want to be anywhere but the ocean. But isn’t everything written for the screen now?

Gazing into ether. She sees the little boy, the cook’s husband, who both represent something but also just are. Everywhere. I want the little boy to die, to be ashamed of what he’s done, to apologize to my mother for looking up her dress. His identity cannot hold, but he needn’t blame her! Why was he looking anyway? A rape scene staged in an apartment, that’s what I saw up there. A trap. Each fold speaking a new tale. How did he miss it? Had he even been looking?

All the while, marriage and war, evolution and history, forgetting and ongoing. We cannot say without consuming. And making, after all, is a kind of consumption.

Amanda Montei is the author of "Two Memoirs" (Jaded Ibis Press), among other projects. She holds a Ph.D. from the SUNY Buffalo Poetics program and an MFA from California Institute of the Arts.

“Rock Garden in the Back Yard with a Ghost Tree and an Evergreen,” “Stay,” “Disappearing Act” 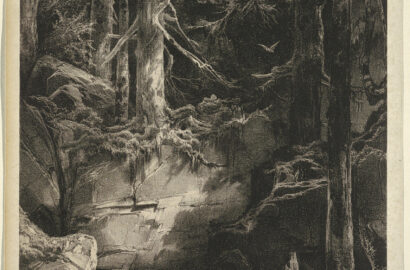 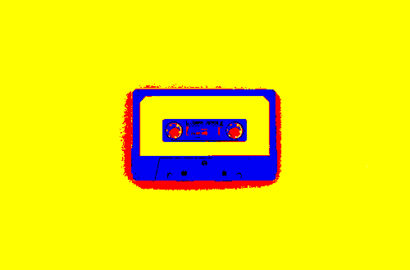