When I say I live in the moment, it’s not a brag. Time makes no sense anymore, and the present is all I’ve got, and it seems a fitting place for an eighty-year-old woman. I think of each moment as a nautical swell, and I surf from one to the next, and never wipe out. Some moments are longer than others, some steeper. I can carry on a reasonable conversation, make a birthday cake, get to the bathroom, feed the dogs. I can make things out of clay. If I keep my wits about me, I can handle whatever shows up in the present, but mention something interesting that happened yesterday and it’s a different story. My daughter recently referred to a conversation we had the day before, and I drew a blank. No memory of it at all. I am used to things slipping my mind, but not quite so quickly. This lapse terrified me, and I said as much. She tried to comfort me, talking about how stress affects everything, and how long I’ve lived, how much to remember already, and she calmed me down. I am beginning to understand that each day is a day unto itself; there’s no guarantee how much of Friday will survive the trip into Saturday. Things get left behind. A lot gets lost overnight.

I made puppies today; they look as though they made themselves. They are drying on the windowsill. Cavorting. I also made a creature holding a very small version of itself. I used the terracotta, which is almost gone. I’m not loving the new white clay; it’s so slippery, like making something out of a flounder filet.

So far, so good. Making faces using the gray clay. Two little girls, both calm; one bird, another bird, and what now appears to be an angel with a broken wing. I am suddenly deeply involved in his/her (its?) repair, but I don’t believe flight is part of its future. The wing is too badly damaged. Is this how an otherwise sensible old woman discovers an alternate reality? To look down and find in her handful of clay an angel with a broken wing, no features on his poor face, and no way to mend him? An angel who will have to make his way on this earth and learn to hide his wings? We are a dangerous species. Better warn him. The dogs are barking. Someone is at the door.

I am making angels and birds and fish. An imaginary conversation ensues.

Is that an angel?

No, that’s the sea turtle.

Is that the bird?

No, that’s the angel.

It doesn’t work that way.

I show her the bird.

It has to be an accident, I tell her.

And then you enhance it.

The crows were carrying on so loudly I didn’t hear the telephone at first. It was my grandson Joe, and I always pick up when he calls. He is worried because I am so hoarse, but I told him it was nothing and sent love to his big family. He sounded good.  Then I went to the screen door and cawed twice and the crows all got quiet. Usually there’s only a little pause and then they are back at it. I have a swollen gland in my neck, which hurts, and a frog in my throat and it must have lent some serious authority to my caw, because they are still quiet. Good lord. Minutes go by. My god, what did I say?

Half an hour and not a peep out of the crows.

New clay arrived! I made a snapping turtle. It isn’t very good, but I’m letting it survive. I was making the very simple face of a young boy when the terrible news came on. The eyes are just dents, no lids, no iris, just hollows from pressing my index finger into the clay. I don’t know how this will dry, and need to keep a look out as I’m not sure he will know he has eyes. He has a round face and his mouth is open. Turned the radio off.

Sadie went upstairs after breakfast. She preferred an empty bedroom to me not paying her any attention. It made me feel guilty and it hurt my feelings, which is a lousy tasting brew. She just now came back down and is lying next to me on the couch. I made a little creature I just love. I don’t know what it is, or what it mostly is, sort of half bird, half little mammal. It’s a dinosaur, my daughter Sarah says. I’m thinking of colors to paint her. I checked on my angel. I’m trying to fix the wing so it won’t fall off. The slip is drying but it’s awfully fragile. Drying always looks like dying.

Had to use the knitting needle to make big holes for eyes on the little boy. Reminded me that “stare” and “starve” come from the same Indo-European root. 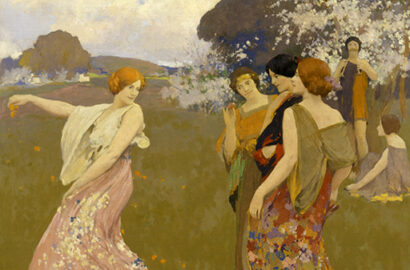 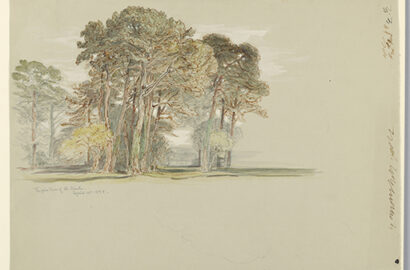