I’ve been digging around in a folder of writing so old it’s typed. Found a poem that is shorter than its title, or almost. Hardly a poem, but it was too perfect, what Lenore said, I had to write it down. Forty years ago? She was my sister-in-law, ex. Such a smart funny woman.

Lenore Says the Poet Is Acting Like a Shoe Salesman

We’re all selling something.

Jerry Stern. I was crazy about him for years. “I’m in it for the pleasure,” I told him once, which was a lie. He grinned. “I’m in it for the pain,” he said. Spoken like a poet. Then one day Chuck’s friend Ron showed up as a ringer for the Viking Penguin softball team. We all went out drinking after the game; Ron and I kept eyeing each other. My god, he was sexy. I wish there was a better word, but I can’t think of one. Finally I leaned over and said, “Wanna fuck?” and we went to Central Park and did. That lasted a couple of years. Man, what a sweet mistake.

Waiting for a cool new shape to dry. Sort of half frog, half shield. Found another poem about my mother playing jacks. Everything I touch gets covered in clay. The poems, the doorknob, the coffee cups. Painted another pig face bright pink. Biggest thing I’ve made so far. Five inches by six inches. Very cheerful.

Today I am cooking like a crazy person, corn chowder, chicken soup, both delicious, or at least the chowder will be after I reduce it in the oven. Now we’re out of half and half and heavy cream, so I will have to make a run. It is a beautiful day. Made two new dinosaurs, babies, I think. They aren’t very good but I’m fond of them.

At eighty you don’t expect to learn something new, at least not every day. However I am learning something new every day. Granted, it’s the same thing, but I learn it over and over with the same startled awareness. I look out at the lush green expanse behind my house, gazing with pleasure at everything growing, especially my locust tree, loving the spread of its branches, and at the same moment, or a moment later, I remember this is not really my green yard, and not really my tree. Mine to appreciate, to care for while I live, but I don’t really own anything. What is mine to keep? Secrets, maybe. Nothing else. Mortality is hitting home in interesting ways, but it doesn’t diminish the pleasure I take in the way my locust fills the sky—my locust, old habits die hard.

Had two dry dinosaurs. Painted one green, the other pink. Also made an unfriendly woman. Because why not? We don’t always feel so friendly. But leaving Sunflower, I heard a voice call, “Hey, good-looking,” and I turned around. “You knew to turn around,” said a somewhat disheveled guy, not necessarily in possession of all his marbles, but it was a sweet moment.

Loving my amphibians, or whatever they are. Made one tiny creature after another today, mouse, anteater, turtles, must have made a dozen. Catherine came over, angered and hurt by Liz, and I made her a creature to bite Liz in half. She took it home with her.

Bought a bottle of vanilla, chugged the equivalent of two shots, had to lie down. Vanilla is alcohol. My first taste in seven years. I am not drinking because of my problems, I am drinking because I am an alcoholic. Such an ugly word. Why can’t we be unicorns or begonias or something? What’s odd is that I don’t feel guilty. Possibly because I’m not lying to myself. And not even a shadow of guilt. What’s wrong with me? Have I finally grown up? I think I’m just living my life.

Painted two more puppies, one of them kind of a mustard, the other a bright brown. The paint comes in tubes and squirts on in thick curls. I use my fingers because everything is small and it feels so creamy. Thank god it washes off. I put the puppies back with the others on the windowsill underneath this big object that had something to do with radar on a plane in World War II. It’s on a pedestal; the shape is lovely, blimp-like, but slender.

Late now. This time every night, I put everything down and think about Chuck. It almost feels as if he’s here.

After Chuck’s memorial service, I remember the weirdest physical sensation. It took me a little while to figure it out. I’m alive, is what it turned out to be. I’m alive.

“How Can I Make Them Hear Me?” 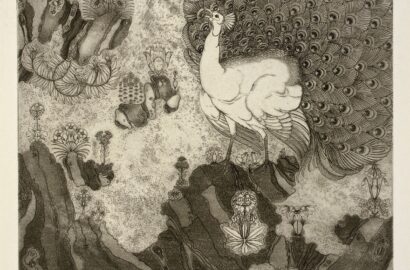 “English as a Second Languish” 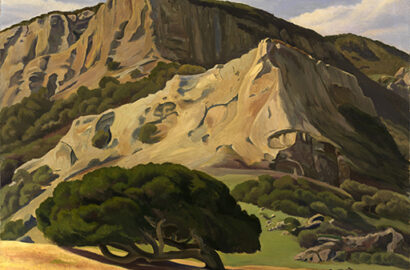