It turned out that it was a woman, the subject of Picasso’s painting, and for good reason. Her squeezebox, its arrangement of folds and so-called bass, to say nothing of its fluent discharge of sound, how every inflation collides with its double, collapse: Two warring motions, one force bound to the other, one giving life to the other. It is no wonder then that Japanese strippers are known for the erotic act of Doing the Accordion*, though such vulgarities are best not aired in civil society. In this case, where the fragments most thickly steep the canvas, color exists without tone, like the drained skin of a lover against a clear night sky. Here the shapes fan out in a savage grid. Here the sounding body and the human body melt and are allowed to wed and evaporate down to the artist’s signature. Threadbare. That is to say, tenuous, while also describing a finely spun web.

The human eye masks useless images. Saccade means sweep of the eye. A prison guard presides over shadowed players, among them a quiet man. Ragged. An inmate with a cosmic gift for cards. The gendarme thumbs the poker deck, his soft breasts straining their stiff checked suit, ring finger pressing, he drags his right hand backwards and each card goes along for the ride, each flush face frozen, an arc in the air like pleated bellows, the way time elongates at will, the way a snake forms volutes with its body, contracting or expanding like a spring from one anchor to the next by means of fragments fused smooth by sleek design. Officers smoke around the white hewn table. Their appraising gazes grunt at the ragman in their midst. The still of his hand, its infinite silences, proof of the will still lodged in his folds. These men cannot deny it. His gift transfigures their game. But nothing reconciles their clashing visions of what he is or what he wishes or if his existence – once the landscape of night is switched out for day – even matters at all. What else is the sky above, but an endless band wound loosely on a roll, lit to give searching creatures inside the comfort of motion and illusion of time.

One more round, he is promised, in exchange for release. He instructs his son, a boy of nine, to hide behind the old barracks. There, to one side of the barbed fence, animals in pens feed on shiny fruit. On this side, a stew of human waste stagnates in a ditch. Here, the child is to remain, in perfect silence, until his father has won at cards. At a distance along the fence, hollow notes of a folksong crackle from an open doorway. The makeshift brothel hums with copulating clients. Laughter carries, intact, on the wind.

In the enclave of men in buttoned brass, the prisoner eats from a plate of peelings. He is faintly aware that his son will need food for the long walk ahead, but in the thralls of his own hunger, he spares none. Fire purrs against the grate in the parlor. Ice flowers frost the edges of windows. Orange light from the house shrivels fast behind him. Along the fence crowned by concertina wire, he drags his way to the waiting boy. Tortuous wind slithers through night’s arteries. He approaches the bordello, and, across from the animals, where ground meets fence, it is the spilled apples he spies first.

Every frame the brain discards, every blank space is replaced by filler, a fake, a violence merciful to the senses, an elongated reel dragged backwards in time. But the bloodless eye of the moon doesn’t miss a thing about the small body heaped on a helix of barbs coiled high above the animal pen. The subject changes everything. The brown sow grunts at rotting apple cores lying in her trough. Art is life stilled. Not moving but poised to move. The artist knows that an instrument makes a body whole. To paint strings or keys into likeness of flesh is to endow it with a mote of eternity, what it is to be a nature morte. What it is to see nothing. To dream nothing. Not through pupils but graven stones for eyes. Brambles from the wire embedded in skin without tone, or a final resting countenance, a release from the commotion of endless asking. To submit to this scene is to live for a moment beside the eye and the eye’s perpetual blind spot, to attune the fork to that primordial sound before any body was there to hear it. In a remote corner of sky hangs a fraying seam where the roll both ends and begins – not quite provenance – and a pleat of one’s selves against this backdrop of constantly unfurling firmament, one self perpetually folding into the next, each one sui generis, in a class by itself, and the inexhaustible sky painted, as it is, of colliding stars, pulled through history, back and back, by the very music that consumes them, with the subject’s changing body, with the subject’s rippling sound, at every turn.

*From A Life of Picasso by John Richardson.

Inna Effress is a speechwriter, fiction writer, and poet who emigrated from Ukraine to the United States as a child. Her work appears in numerous publications, including "Santa Monica Review," Swan River Press’s "Uncertainties" series, and "Strange Tales at 30" (Tartarus Press). 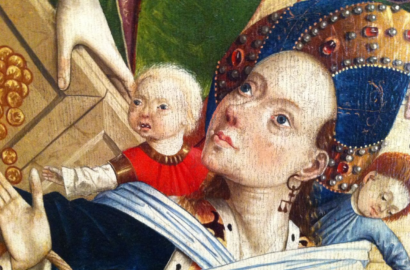